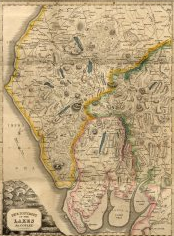 Since the 1750s, English Lake District scenery has inspired writers and artists, and attracted legions of travellers and tourists. While the region is most famous for its associations with literary figures like William Wordsworth, John Ruskin, and Beatrix Potter, it has also been the site of repeated conflict over cultural heritage and environmental encroachment. In the late nineteenth century, the district came under the stewardship of the National Trust (est. 1895); in 1951, it was designated a national park; in the twenty-first century, a bid is underway for designation as a UNESCO World Heritage site.